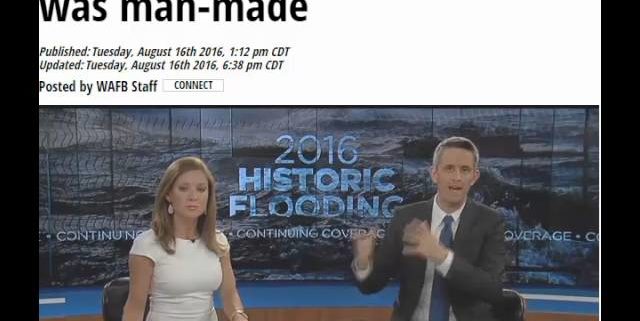 Walker Mayor: Louisiana Flooding Event Was Man-made
WALKER, LA – The frustrated mayor of Walker, Louisiana said Tuesday that the flooding event in his city was “man-made” and announced plans to file suit against the state of Louisiana and federal government.

Walker Mayor Rick Ramsey said a six-foot tall concrete barrier that was put along I-12 when the interstate was expanded last year essentially put the city of Walker “into a bowl” because he said the barrier prevents water from draining out of Walker.

“When the Amite River went up, it hit that wall,” Ramsey said. “We have video evidence that shows the concrete barrier and water lapping over the north shore of the interstate and bone dry on the south of the interstate. They basically built a dam for Walker.”

The mayor added when the Amite River went up, the floodwater hit that wall and some of the water went toward the Millerville Road area and some went into Walker.

Ramsey said he imagines many insurance companies will want to join the potential lawsuit because they now face having to pay billions of dollars in claims for what he believes is negligence on the part of the state and federal government.

“I’ve been begging them for three-and-a-half years to give us more drainage under the interstate,” the mayor said.

A DOTD spokesman reached by phone early Tuesday afternoon said the agency had no immediate comment about the potential lawsuit.
[ne_semantic_video video_id=”6lg01G9hDEI” title=”Walker Mayor: Louisiana Flooding Event Was Man-made” upload_time=”2016-08-17T00:19:57.000Z” description=”WALKER, LA – The frustrated mayor of Walker, Louisiana said Tuesday that the flooding event in his city was ‘man-made’ and announced plans to file suit against” duration=”PT7M22S”]

Louisiana Man Made Flood And Zika