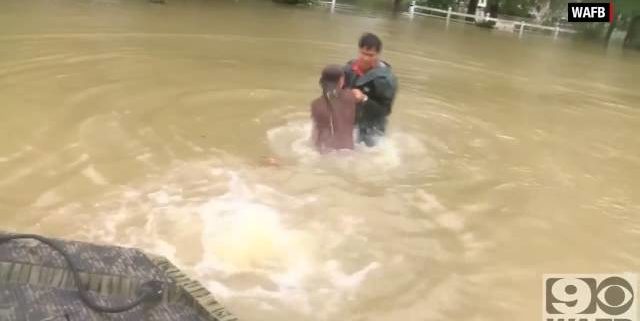 Rescuers pull a woman from her submerged car and dive to rescue her dog from rising flood waters near Baton Rouge, Louisiana.

Saturday, as the U.S Gulf Coast got pounded by unprecedented rain and flooding, a group of rescuers pulled a woman and her dog from her car just as it slipped under the floodwaters and sank.

CBS affiliate WAFB Channel 9 reported that three Baton Rouge men in a boat came upon the sinking red convertible car just as it was about to completely submerge.

“Get out!” one of the men called to the woman inside.

“Oh, my god, I’m drowning!” she cried as the rescuers tried to break the window, then slash open the vinyl top.

ne of the men jumped into the water, tore open the roof and was able to haul the woman to safety just as the car disappeared beneath the murky brown water.

“My dog,” she said as the rescuers on the boat threw a life vest into the water. “Get my dog.”

The man who jumped in the water tried to find the dog below the surface, but couldn’t.

“Dude, she’s gone,” says one of the men still in the boat.

However, the rescuer in the water dove under the surface, then reappeared with wet, wriggling white dog in his arms, saying, “I got your dog!”

As the Louisiana floodwaters swallowed Lyn Gibson’s two-story home, she hacked away on a hole near the roof, desperately trying to get to safety.

She used a saw, a screwdriver and her feet, knocking her way through wood, vinyl and sheet rock.

“I just kept picking and hitting and prying until I could get a hole big enough,” the slightly-built, 115-pound woman said. “I would saw for a while. I’d kick at it for a while.”

Eventually, Gibson made it out of her Tangipahoa Parish home with her dogs, and they were all rescued by National Guard soldiers on a boat. It was one of thousands of rescues after a deluge dropped more than a foot of rain on parts of southeast Louisiana, submerging roads, cars and homes.

At least three people were killed across the state, and the rescues were continuing late Saturday, including missions by crews in high-water vehicles who went car to car to pluck motorists from a flood-soaked interstate. Maj. Doug Cain from the Louisiana State Police said about 125 vehicles were stranded on a seven-mile stretch of Interstate 12 near Baton Rouge and the occupants were being taken to safety.

In one dramatic moment earlier in the day, two men on a boat pulled a woman from a car that was almost completely underwater, according to video by WAFB. The woman, who is not initially visible on camera, yells from inside the car: “Oh my god, I’m drowning.”

A woman and her dog have been rescued from a sinking car in Louisiana after the vehicle became submerged in flood water.

Footage released by a local news channel shows rescuers on an emergency boat attempting to break the window of the car with a pole as the woman shouts from inside.

One of the rescuers, David Phung, jumps into the brown water and pulls the woman to safety. She pleads with Phung to get her dog, but he can’t find it. After several seconds, Phung takes a deep breath, goes underwater and resurfaces – with the small dog.

A state police spokesman says authorities are going car to car to rescue people stranded on the Interstate from the horrific Louisiana flooding.

Maj. Doug Cain from the Louisiana State Police said about 125 vehicles are stranded on Interstate 12 between Tangipahoa Parish and Baton Rouge.

He says most of the vehicles are on a seven-mile stretch of the freeway.

Authorities are going in high water vehicles to each car to rescue people and carry them to safety.

The people are being taken to a Target store in Baton Rouge where they can either be picked up by family or friends or will be taken to a shelter.