Louisiana is known for flooding.  From Hurricane Katrina, which was one of the most destructive flooding events to ever hit the United States, to simply a flash flood that takes place in New Orleans, when the pumps don’t work properly, Louisiana residents are used to dealing with flooding events.

One of the largest fiscal impacts of an area flooding is what happens to the real estate.  There are many things that can affect if the value of your home goes up, stays stagnant or goes down.  A particular area flooding doesn’t always have the same effect on property values.  For instance, after Hurricane Katrina, we saw real estate investors flock into Southern Louisiana to buy up “flooded and gutted” homes.  Many of these homeowners were still able to receive their insurance money – and in addition sold their demolished home to an investor. 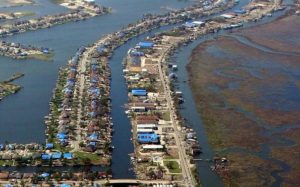 Flooding in the Eden Isles area of Slidell during Hurricane Katrina

Those investors put thousands of dollars into rebuilding the homes, to resell them.  We saw tremendous increases in property values in areas such as Lakeview in New Orleans and Eden Isles in Slidell.  Both of these areas had stagnated in property values until all of the homes in the area flooded and were rebuilt.

Almost 100% of the homes in Eden Isles and the homes in Lakeview were rebuilt to much higher standards than they previously were built to.  Currently, Lakeview is one of the hottest real estate markets in the Greater New Orleans area.  Where the homes in both of those areas were once average – they are now on the upper scale of the area.

We spoke to Shelly Vallee, a real estate agent on the Northshore of New Orleans.  Shelly is the broker for All Around Realty and they have been selling homes in Madisonville, Mandeville, Covington, Ponchatoula as well as New Orleans proper since before Hurricane Katrina.  Shelly has seen the property values of the area that she works in bounce all around after a major flooding event.  She was quoted as saying.

Once homes are rebuilt after a major flood, the long term effect of the property values in that area is generally a positive one.  Since the homes get rebuilt to new standards with granite countertops and updated features and appliances, its justifiable that they are worth more.  The exception to that rule is when an area floods multiple times or is built below the FEMA BFE (base flood elevation).  In those cases, the flood insurance may become prohibitive to purchase in that area.  What we see when that is the case is that the price of the home must come down for the homeowner to be able to afford the flood insurance.

Long Term Values of Homes After a Flood

Notwithstanding the above mentioned situations where homes or subdivisions have been flooded multiple times or where the home was built below FEMA’s guidelines, homes generally appreciate in value after a major flooding event.  Needless to say, having your home flood is never a fun experience and the fact that you lose everything is a traumatic thing to go through.

The good news is that in many instances, if you can make it through, your home may be worth more than it was before.  Needless to say this takes some time, since in some instances, the homes must be sold and rebuilt prior to the values to start increasing.  Nothing happens ever fast in the real estate industry, but the long term effect of a major flooding event has proven to be an increase in property values.

What You NEED To Know About Flood Insurance

May Brings Flooding In Louisiana
Scroll to top