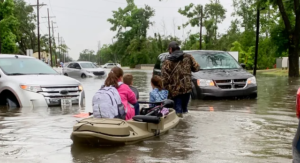 There are currently flood watches in effect in much of the south-central United States. The National Weather service stated that 30 million people may be threatened by flooding this week, including parts of Louisiana, Texas, Oklahoma, and Arkansas.

Lake Charles, Louisiana, in particular, is experiencing a torrential downpour that is likely the worst rainfall on record in 100 years, according to Lake Charles mayor, Nic Hunter. “And it’s getting to be perhaps a little of a misnomer to call these events 100-year events, because they are happening more often,” said Hunter. Mayor Hunter did not have an exact number of homes that have already experienced flooding, but said that the number is likely in the hundreds.

Louisiana Governor John Bel Edwards has declared a state of emergency and stated that state officials are in contact with local leaders concerning the situation and wrote, “Please join me in praying for the families in Lake Charles who have seen so much loss already,” on Twitter. 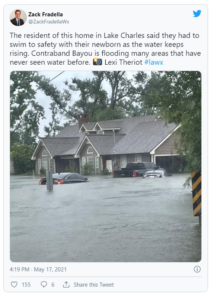 This is already the third-wettest May in recorded history for Lake Charles, according to AccuWeather. The rain is likely expected to continue through at least Thursday and “Additionally, the heavy rain may cause many streams and possibly larger rivers to flood,” the weather service said.

Lake Charles is a part of Calcasieu Parish, where “all areas of the parish are experiencing flooding on the roadways and conditions are deteriorating and changing quickly,” the sheriff’s office said on Facebook.

According to the National Weather service, anywhere between 8 and 15 inches of rain fell on Lake Charles. At least 80 people had to be rescued from their homes according to the state fire marshal. 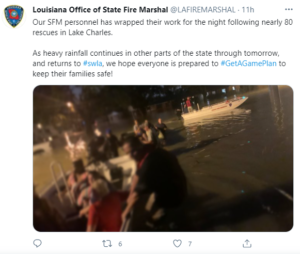 Lake Charles residents are still recovering from being hit by not one, but two hurricanes just last year when Hurricanes Laura and Delta plagued the city.

Because of Lake Charles flooding, people are urged to be prepared and stay safe this week as more rain is expected throughout the week and will make the already dangerous situation even worse.

If you have any information that can benefit others on the community, send it in.